Dancing in the Dark - a novella 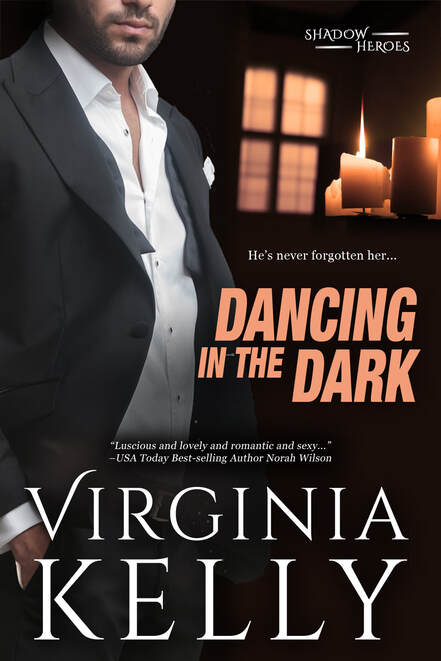 What if you discovered all you ever wanted were the things you left behind?

Covert CIA agent Matt Kincaid is back in tiny Walton Springs, only to find Janey Blackmon waiting. Matt's not there to reminisce with the girl he's never forgotten...and he's definitely not there to divulge government secrets about her missing brother.

Ten years...and Janey hasn't forgotten the love of her life...or that he abandoned her on prom night. Bound by duty and honor, he was shipped out to parts unknown by Uncle Sam. But she knew he'd go because adventure is in Matt's blood. Being stuck in a small town with plain Jane the librarian wasn't ever in his plans.

Trapped by a flood, with no phone or power, desire tempts them both. Will passion—and Matt's offer to recreate prom night—lead to a future together? Or are they just dancing in the dark?

Reviews: "This was a tremendous story of love, family and adventurous spirits. The characters were genuine but still established that explosive chemistry required for a fabulously steamy romance. I loved Dancing in the Dark, it was the perfect balance of romance, romantic tension..." Tome Tender.

Read an interview with Matt Kincaid at Hot WIPS and Sassy Chicks﻿﻿.
EXCERPT: From Chapter One

Not quite-dark-o'clock. Matt Kincaid rubbed the back of his head and stretched as he peered out the living room window. The lights were out, but he could see the flooded street.
The lights were out.
Great observation. If he'd been this observant while on this last op, he'd probably be dead.
Off the adrenalin high of work, his body begged more sleep. A glance at his watch told him he'd forgotten to reset it. It still read Abbottabad time, but he was too fuzzy-headed to do the math.
Rain fell in sheets and rushed downhill to swirl into an overflowing drainage culvert. Good thing his mother's Victorian era home sat high on brick piers.
His usual long flight home from an overseas op, along with the debriefing from hell, had been punctuated by a hair-raising flight from D.C. to Tallahassee and a nightmare drive on slick two-lanes into Walton Springs. Exhausted after thirty-six hours of travel, he'd collapsed onto the couch sometime after midnight. Now the time was a total mystery.
Coffee. He needed coffee. He walked into the kitchen in the semi-darkness.
A sudden gust of wind lashed rain against the windows as he reached into the cabinet for the coffee his mother kept there.
Nothing. He reached right, then left.
What the hell? A creature of habit, his mother always left the coffee next to the pot.
There was just enough daylight filtering in for him to see she hadn't…probably because she'd been in a mad rush to meet her sister for their drive to the mountains.
Hell, what did it matter? There was no power. No power, no coffee.
Shit.
Shit, shit, shit.
He really needed coffee.
With a deep sigh and a stretch that ended in a twist at the waist that popped his back and cleared his head, he walked back into the living room and turned on the battery-operated radio on the bookshelf.
"At nine a.m., the National Weather Service out of Tallahassee issued a flash flood warning for residents of all coastal Florida counties in the Panhandle. A low pressure system that moved in overnight is expected to bring five to seven inches of rain to the region in the next few hours. All residents of low-lying areas should be on alert."
So, it had to be after nine. Matt listened a bit longer, then the warning claxon came on and he turned off the radio.
No coffee. No power. Floods.
What the hell else could happen? Earthquakes and lightning?
A flash lit up the living room, followed by a boom of thunder so close the house shook.
Yeah, lightning.
And he knew better than to tempt fate.
He looked at his watch, again. Judging from the time in Abbottabad, it had to be nine-thirty a.m. here.
He could use another couple of hours of sleep. Maybe then he could straighten out his sleep patterns and enjoy the next few weeks off. He'd promised his mother he'd take care of some problems on her always-in-need-of-repair one-story. And he'd promised himself some fishing.
He rolled his head and shoulders to loosen the kinks of sleeping on the too short couch, and made his way down the hall to the bedroom he used when he visited, pulling off his shirt as he went.
Thunder boomed, rattling the windows. The spare room door opened and a person stepped into the hallway.
In one quick movement, he lunged forward and executed a chokehold that efficiently subdued the intruder. "Don't move," he ordered, and instantly realized that his intruder was small and soft and wore a too big shirt that shifted as he touched bare skin.
Not his mother.
He recognized her just from the way she smelled, fresh and unpretentious and familiar. From that silky skin. From the feel of her curves against him.
Hell, earthquakes and lightning were nothing.
Janey Blackmon was everything.