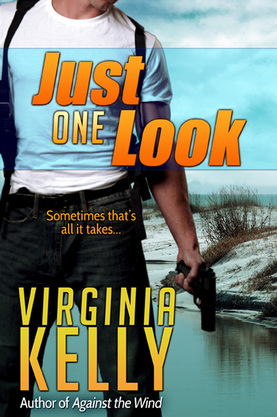 Sometimes that's all it takes…

FBI Special Agent Drew Davenport, still recovering from a life-threatening wound after a disastrous shootout, doesn’t have time to be serious about any woman. But Mia Alvarez, with her down-to-earth warmth, leaves him blind-sided.

A painful experience crushed Mia’s belief in love. The last thing she needs is an entanglement with Drew, whose sister is marrying her brother. And certainly not when she’s keeping a major secret. Despite her misgivings, forced proximity and overwhelming attraction lead to passion.

When Mia's secret shows up in the form of a stalker, Drew’s determined to protect her. Can he overcome his fear of failing again when emotions get in the way? And while Mia trusts Drew with her safety, can she trust in love when it happens with just one look?

Digital and print at Amazon. Print copies at Barnes & Noble.

Chapter 1
﻿
FBI Special Agent Drew Davenport wanted to punch something. Pitch boulders off a mountaintop. Have hot, sweaty sex with Scarlett Johansson. On the floor.

Yeah. He was antsy and bored to death.

No, he quickly corrected, not to death. Death had been a near thing six weeks ago. He still wasn’t completely back from that little fiasco, even if he refused to admit it to anyone. Which was why he was stir-crazy. He couldn’t do what he normally did.

Work. Run. Hell, move with some degree of normalcy. At least normal enough to get him off desk duty.

He felt trapped in the tux jacket he’d struggled into for his sister’s wedding. Since he’d had the staples out of his stomach, he had more freedom of movement, but damn, why waste that freedom wearing a tux?

But he had to give Blair credit for choosing to be married on the island just off Emerald Bay. They’d spent so much time at their grandmother’s Gulf Coast beach house that the area was like a second home. He and the wedding guests, almost exclusively family, were lodged at a very nice resort hotel on the island. He could look forward to days of sun, sand, and blue water. All of which would probably be good for him, recuperative.

Lots of people? Not so much. At least Blair’s husband-to-be, Michael Alvarez, was a friend, despite what had gone down just a few weeks ago. But his whole family? Hell, Drew just wasn’t up to dealing with all those strangers. Other than his sister, mother and grandmothers, his own family—God help them all, Uncle Benjamin at a wedding—was too much.

Michael’s family, some of whom he’d met while he was in the hospital, others last night at the rehearsal dinner, seemed nice, friendly. The younger sister, over the top bubbly, had exhausted him. The older one should have been seated next to Uncle Benjamin. Well, his sister was marrying into the family, not him. Their brother, military, hadn’t arrived, but was due today.

A knock on the door interrupted his thoughts.

“Drew?” his mother called. “Are you dressed?”

“Coming, Mom,” he replied, resigned to the beginning of the insanity of wedding day.

She beamed at him when he opened the door. She was thrilled that Blair was marrying the man she loved. And she looked, well, gorgeous.

His mother was gorgeous. Wow. Why hadn’t he noticed before?

She came in and hugged him, holding on a bit longer than he’d expected.

“I love you, Drew,” she said, and he heard tears in her voice. “How are you feeling?”

“I love you, too, Mom,” he replied. She’d been beyond worried when he’d been shot. Blair told him she’d stayed by his bedside round the clock. Sometimes he thought he remembered seeing her. “I’m okay, really.” He’d probably repeated that phrase twenty times a day since he’d gotten out of the hospital.

She stepped back, but took his hand. Yep, tears in her eyes. One escaped her attempts to blink it away and rolled down her cheek before she could stop it.

“I saw you running this morning. Are you sure you should?”

“Mom, I’m not one hundred percent. I know that, but I have to get back in shape to do something other than sit at a desk.” And work wasn’t his only concern, because if Vicky Holland, the downstairs neighbor with good intentions, an amazing imagination, and the hottest body ever couldn’t get a rise out of him, he had another problem. But no way in hell was he talking about that with his mother.

“Recover slowly. Don’t rush going back to work. Have other priorities.”

“Work is my priority.”

“Michael has found there’s more to life than the FBI, Drew. Maybe you should follow his example.”

“Okay, okay,” she said, still sounding too close to tears for comfort. “Do you need help with your tie?”

“I think I can manage. Do I have to wear the cummerbund?”

“Andrew Sloan Davenport,” she said before adding the clincher, “the Third. There isn’t a cummerbund. Didn’t you check the tux?” Now she sounded like a pesky mother.

“Great.” Of course he hadn’t checked the damn tux. He’d gotten out of having it fitted because he and Michael were close enough in size that he’d told the rental place to use whatever size he chose.

“Blair’s dressed and left. You should, too.”

“Michael’s the groom. He’s anxious to marry my little sister.”

“Everyone else is dressed and ready.”

“Is Uncle Benjamin ready?” he countered.

She laughed. They both knew his great uncle functioned under his own rules. “Yes, he’s talking to Michael’s father in the family suite.”

“Really.” Interesting. Uncle Benjamin spoke only to those he considered of his “class.” Rich. Michael’s father wasn’t. The fact that Carlos Alvarez was an engineer didn’t figure into Uncle Benjamin’s calculations. Only old money counted.

A knock, followed by a male voice asking, “Drew, you in there?” had his mother opening the door.

Michael Alvarez greeted her with a hug and stepped inside. His dark hair was combed, his tux perfect, but he looked harried. He still wore the sling on his left arm, a legacy of the shootout. He turned to Drew. “We need to leave.” He glanced at his watch. “Now.”

She would know. Davenports were big on ceremony.

“I’m going to the car,” Michael said. “If you take longer than five minutes, I’ll get a ride with someone else.” With that he said a quick goodbye, pivoted and left.

“He’s nervous, honey. I’m sure it’s been a challenge meeting the Davenports, even if Blair was there to mitigate the worst of it.”

Just as much a challenge as when she’d met the Davenports herself, Drew figured.

“Please,” his mother said, “get to the church before Uncle Benjamin. I’m afraid of what he’ll say to Michael’s family.”

“Michael’s family will be fine.”

“I don’t want anything to mar this wedding. I adore the Alvarez family. They’re so down to earth.”

Not rich snobs. That’s what she meant. The Davenports were snobs. His mother had had a hard time fitting in her entire married life. Even after his father died, she still struggled even though the obligations of her position in the family were fewer.

“I’m nearly ready.” Yeah, all he had to do was fix his tie. Why didn’t the tux come with a clip-on? He didn’t need another challenge.

Hell, the bow tie was only the smallest of his challenges.

“Doesn’t Blair need you?” he asked.

“I’m driving over with your grandmothers in a few minutes.” She looked at him, concern in her eyes. “Are you sure you don’t need help with the tie?”

It was on his lips to tell her he didn’t need anyone’s help, but that would hurt her feelings.  She’d been hurt enough when he’d been shot.

“Please,” he said. Her answering smile made her face light up which made him feel like he’d done something right for a change.

For things to be right for him he had to get to work again. Once the wedding and reception were over, he’d be on track to getting his life back. That was all he needed.

No distractions. No more people he loved caught in the crossfire.

In other words, no more screw-ups